Round 1: I made daily observations during my 1st grade classroom's social science Space Project Based Learning (PBL) unit in a 40 minute period using a tally mark system to track 5 common behaviors after high performing students completed an assignment over the course of two weeks. Over the following two weeks I then led the students away from our typical way of learning the content and showed them a 'Magical School Bus' video and told them we would be creating our very own classroom movie. The students worked in small collaborative groups and produced a contribution to the final product. One group researched photographs of planets to recreate on an animation tech tool. A second group recorded themselves reading a script using an iPad. A third group researched and documented interesting facts of various assigned planets using Chromebooks. A final group worked on labeling a poster presentation of the solar system.

I immediately noticed not only a change in behavior among my 'early finishers' but the whole class was so involved in their activity their focus wasn't on what other groups were doing or concerned about socializing with their friends. Academically strong and weak students displayed their talents in an environment that enriches teaching practice so that everyone is excited about their assignments and is able to begin at the same time and there are no “early finishers” to distract their classmates.

The Figure 1 graph shows the frequency Students A-D received tally marks in the various categories during the original lesson about Space after their work was completed. After the innovative teaching strategy was implemented the same observations were taken again over the same two week period of time and the graphs were compared to see if the proposed study was accurate. Figure 2 shows a reduction of almost half in some cases in all five categories among all four boys in the study after the teacher introduced the inclusive teaching design to the classroom during the same social science period.
Round 2: I got another opportunity to collect new data the following school year with my 1st and 2nd grade combination class to see if I would get similar results. This time the PBL unit was focused on 'Our Community' and students were asked to collaborate on common goal to present to an audience about the importance of working together in the American Canyon community. Groups were formed to create various components of the American Canyon Community Garden such as a detailed map of the vegetables that grow in the plots, the painting of kindness rocks to add to it's rock garden, student recordings explaining their thoughts of the benefits of having the garden, and a thank you letter to the city for hosting our field trip. The same behaviors were recorded over the same period of time and below are the results of that study. 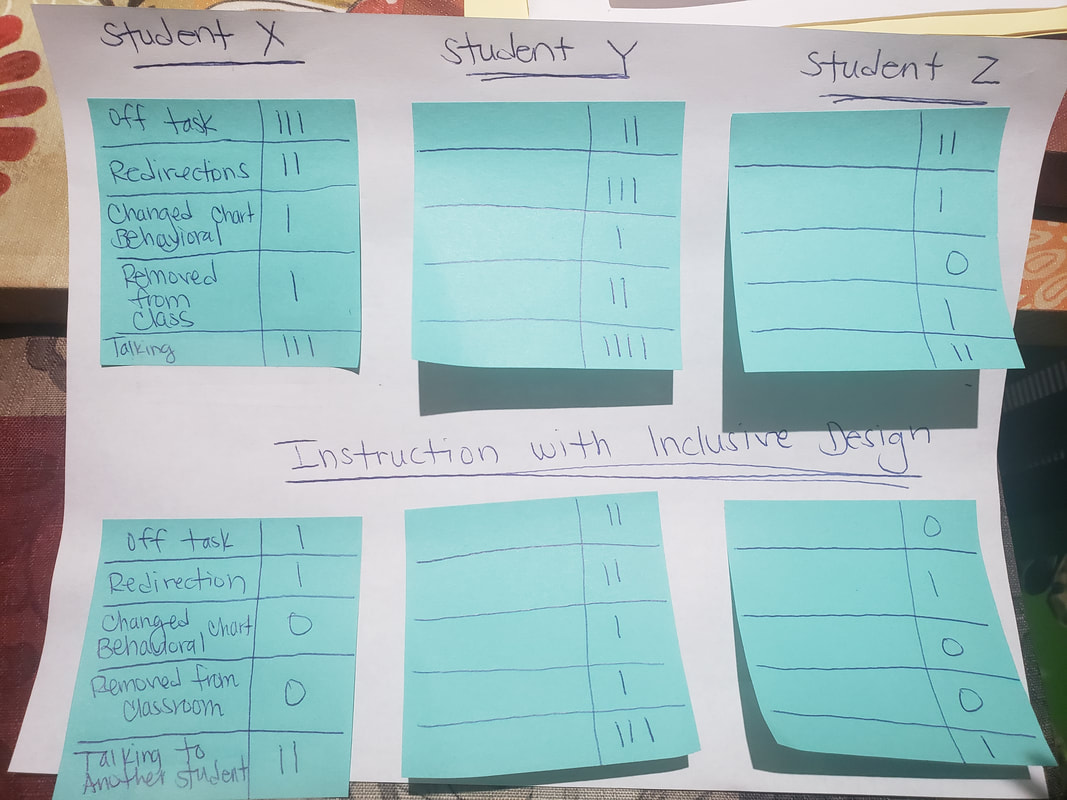 Within my second study there were obvious differences. I only observed three students and the initial behaviors were not as significant as they were with the first study group therefore the great decrease in behavior is not a result from this study.