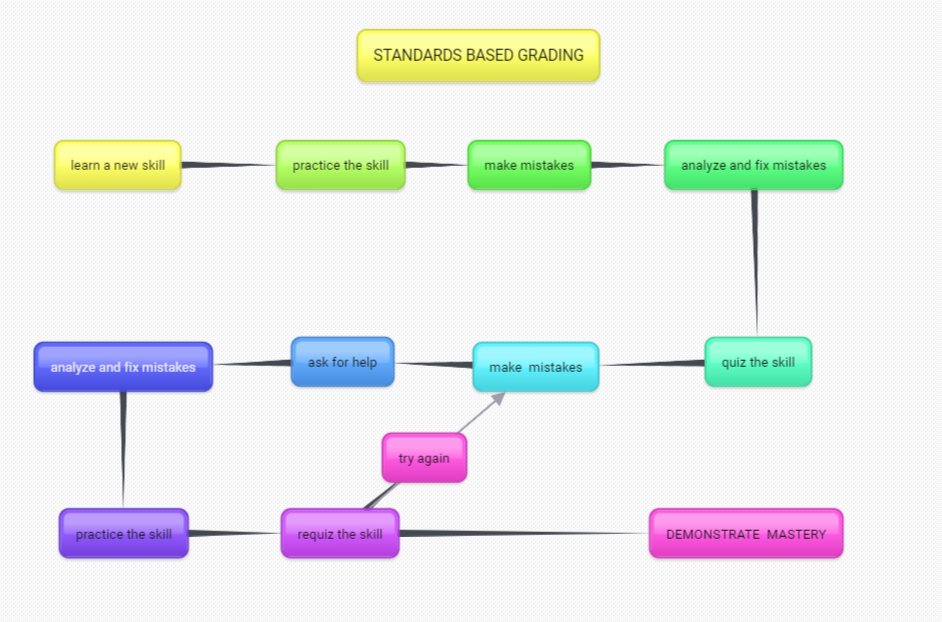 For more information on standards based grading, click here  Standards Based Learning

I've developed a method that has made my life a whole less complicated. This is the outline I follow when I sit down to plan the next writing assignment.

WriQ: Digital Tool for Easy Assessment of Conventions and Mechanics

WriQ will change the way you assess writing conventions and mechanics, thus changing the way you teach.

​WriQ is a Chrome extension for teachers that allows them to make the most of one-to-one or small group conferencing, and not waste valuable time searching and correcting misspellings and punctuation errors.  Connected to Google Docs, this amazing web tool locates and assesses errors in mechanics and conventions. This frees up time to concentrate on content and style.  Google Certified Innovator, Alice Keeler advises,  "If the Robot can do it, let the Robot do it."

HOWEVER, keep in mind that WriQ is an assessment tool for teachers.  It does not replace explicit instruction in the English Language Arts.  I recommend allowing WriQ to find the errors, then you use those findings to provide feedback and support in small group writing workshops.

Assessment Results from My Research Study

I had high hopes for my study.  I firmly believed that the addition of Google Docs to my writing program would produce higher scores in all writing domains.  However, the data did not prove me right.

FIRST ROUND DATA
Looking at the pie charts below, it is evident that the number of students who showed growth was low.

I was dumbfounded because a lot went into preparing my students for the study, yet for many students, there was no growth found.

*  Students were presented the scoring rubric at the beginning of the writing session to be used as a checklist during the project.
*  Students read and discussed more than two sources of information on the topic.
*  Students highlighted important information within the text
*  Students took notes, and created graphic organizers that were encouraged to be used during the writing sessions.
*  Poster-sized graphic organizers of important information, and charts of domain specific vocabulary and transitional words were posted around the classroom for easy reference.
*  Students were encouraged to collaborate and assist each other.

This area was the most disappointing.  Of the 20 students tested, 15 could not accurately write an expository essay.  Why did this happen after all the prep work revolving around expository writing?  Keep reading for the shocking reason.

Just like in the area of expository writing, students failed to demonstrate an ability to organize their essay.  Why did this happen? This was not the first time we had written an expository essay.  What caused so many of my students to fail?

"There is no end!":  The Surprising Reason Why So Many Students Failed

When I designed my writing lesson for the study, I never took into consideration that Google Docs would HINDER the final outcome.

After I collected my data, I was shocked that my students actually did better using pencil and paper to write their long essays.

​Now, before we started this writing assignment, my students answered a survey about their general feelings toward writing on computers.  The majority of my students claimed that they liked using a computer to write.  They claimed that computers made writing easier, faster and "funner."  However, their behavior during the  writing sessions proved otherwise.  They complained throughout the study that they were bored. It was too long.  When could they stop? They were not having any fun.  Every day, it was a battle trying to keep them motivated to write.

As I was conducting student interviews, I discovered a trend.  My students liked writing, but not on Google Docs.  The reason was something I never would have considered on my own.  According to my kids, "The page doesn't end."  To a child's eye, the "page" on Google Docs keeps going and going and going.

I found it in Google Slides.  I believe that Google Slides is a wonderful transition between paper-pencil and Google Docs for these reasons: