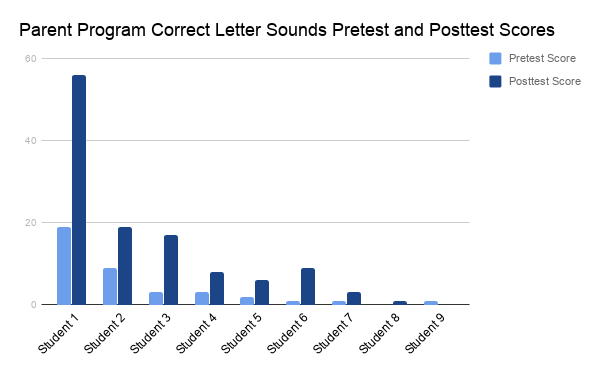 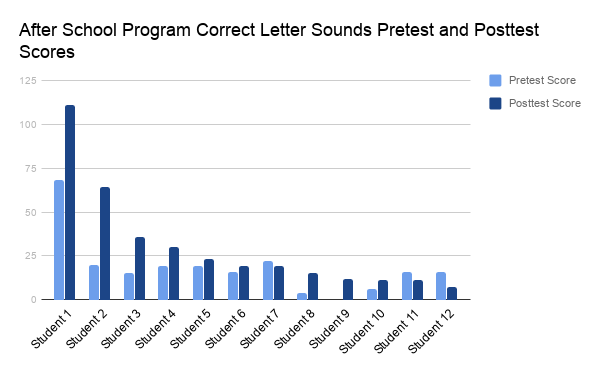 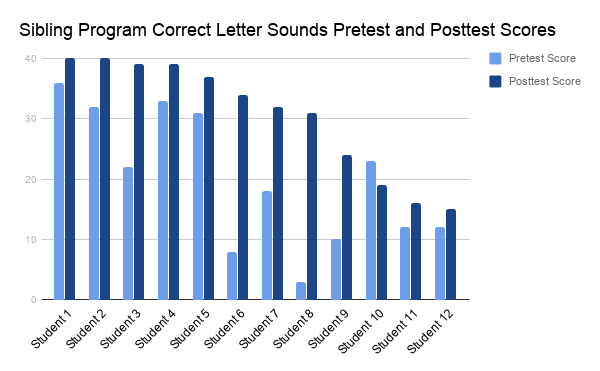 In this four week program, eleven of twelve students demonstrated improvement in letter-sound fluency, with an increase in mean score of 11 correct letter sounds per minute on the DIBELS Correct Letter Sounds post assessment.
Summary and Conclusions:
​
While growth in early literacy skills was demonstrated in all three programs in the study, only the parent intervention program produced a significant relationship between time spent doing activities and score improvement. The parent intervention program lasted one week longer than the others, however additional factors to consider are variations in implementation, setting, individual student development, and classroom instruction.

Below you will find results from post-program surveys and questionnaires that were intended to capture participants' feedback about the programs' features and components.
​
Parent Intervention Program:​ 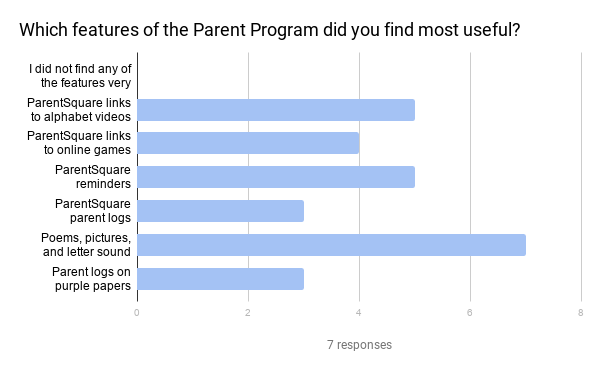 One hundred percent of respondents indicated that the poems, pictures, and letter sound activities were helpful. Every program feature was selected by at least three parents as being helpful.
One hundred percent of parent respondents gave the highest rating of 5 ("Very Much") when asked if they enjoyed the activities. Six out of seven parents indicated that their children enjoyed the activities at the highest level (5), and one parent rated her child's satisfaction at a level 4 out of 5.
After School Program:

In the interest of including more open ended, qualitative data for my project, I used these survey questions for the after school program.  My intention was to dig deeper into the perspectives and priorities of the staff at this organization.  While only two out of three staff responded to the survey, I feel that the information they shared was very valuable.
​Siblings Program: 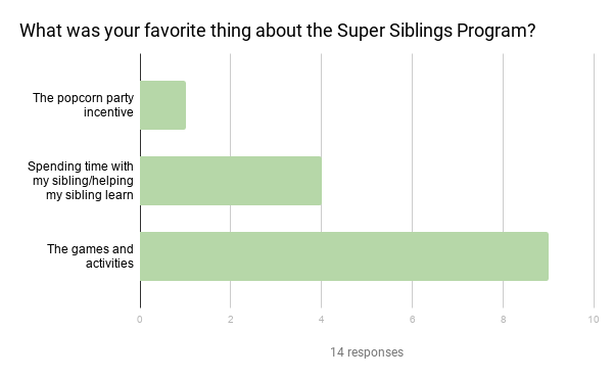 One hundred percent of the participating older siblings (14) responded to the questionnaire, with the majority citing the games and activities as the favored feature of the program.
When asked how they felt about the program in general, a total of 62 percent of all students gave the program the highest rating ("I liked it very much") of satisfaction.  The remaining 38 percent gave a rating of 4 ("I liked it") out of 5.
Summary and Conclusions:

Reflecting on the feedback from each of the programs, here is a summary of my conclusions: